» WSSA » Weeds » Articles on Garden Weeds » WHAT MAKES A WEED

WHAT MAKES A WEED A WEED

By Don Morishita, Ph.D., the Weed Science Society of America

Ralph Waldo Emerson described a weed as a plant whose virtue has not yet been discovered. And when you’re hoeing or pulling weeds, it definitely can be a challenge to find anything virtuous about them. Those that are the peskiest and most hated thrive in places you don’t want them to be, whether in your garden or lawn, in a field or on wild land or roadsides.

Weeds tend to share some common attributes that contribute to their bad name — helping them survive under conditions where other plants would fail. Here are just a few of the characteristics that make a weed a weed:

The more of these weedy characteristics a plant has, the more successful and problematic a weed it will be. One colorful example is the common dandelion. This is the first weed most children learn to identify. It is adapted to a wide range of environments and is found in many parts of the world. As for having mechanisms for spreading, what better way to disperse than by a puff of wind or by kids blowing ‘parachutes’ of seed over the neighborhood? Dandelion plants can also reproduce vegetatively thanks to large tap roots. So unless you cut the root deep into the soil, you can rest assured the plant will reemerge. Dandelions also seem to thrive under almost any growing condition. The hot, dry weather that is less than optimal for grass growth may allow dandelions to take over your lawn.

Common lambsquarters, pigweed and common purslane are examples of weeds that produce thousands of seeds per plant. The seeds are small and light enough to be blown by the wind over short distances and can sometimes survive for decades in the soil. Under favorable conditions, these three weeds can establish themselves quickly and spread profusely. Purslane also can reproduce vegetatively through its succulent leaves, making it especially tough to eradicate. Many a gardener hoed purslane one day only to see it growing at full strength the next.

Common mallow is another frequent invader of gardens and yards. What makes this weed so successful is a tap root that begins to grow deep into soil from the time it is a seedling. That means common mallow can access water in the soil that can’t be reached by shallow-rooted plants. As a result, it can grow in spots where it might be least expected. As an added “bonus,” mallow can reproduce from both seed and root stock, similar to dandelions.

You can’t change the characteristics that make a weed a weed. But understanding those characteristics can help you get the upper hand in your own lawn or garden. Whether you decide to pull, hoe, mulch or treat problem weeds with an herbicide, act early, before those “virtueless” weeds become well-established.

This column is provided as a courtesy by the Weed Science Society of America (WSSA). The author Don W Morishita is a professor of weed science at the University of Idaho where he is superintendent of the Kimberly Research and Extension Center. He conducts research into weed management and biology and leads educational seminars on weed management for educators, crop advisors, producers and horticulturists. 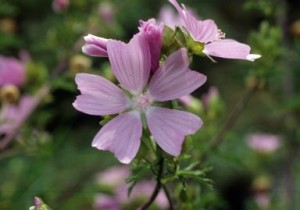 Common mallow is topped by a pretty purple bloom and anchored by a long tap root that grows deep in the soil. The weed is able to access water and grow in spots inhospitable to shallow-rooted plants.
Photo courtesy of the Ohio State Weed Lab Archive, The Ohio State University, Bugwood.org