The western prairie fringed orchid (Platanthera praeclara) is a delicate wildflower that has been teetering on the brink of extinction. The culprit? Leafy spurge (Euphorbia esula), one of the most aggressive weeds in North America, is destroying the orchid’s remaining natural habitat. Scientists are turning the tide with new integrated weed control strategies that are giving the rare orchid a chance to bounce back.

Dr. Rodney Lym, a professor of plant sciences with North Dakota State University, explains that leafy spurge has invaded thousands of acres of meadowlands and prairies west of the Mississippi that were once the fringed orchid’s home.

“The extent of the problem is really staggering,” Lym says. “Leafy spurge grows so aggressively it is upsetting natural ecosystems and dramatically reducing biodiversity as it crowds out native species.”

The Sheyenne National Grassland in southeastern North Dakota is home to one of the largest remaining stands of the western prairie fringed orchid. The plant grows on only 1,200 of Sheyenne’s 23,750 acres and is classified as “threatened” under the Endangered Species Act. 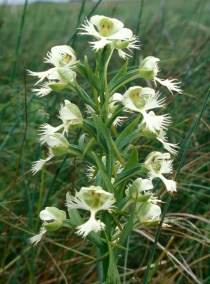 Lym and fellow researchers in the Plant Sciences Department at North Dakota State University decided to design a leafy spurge control strategy that would protect the orchid’s natural habitat. In doing so, they faced a number of challenges. Often herbicides are not allowed near sensitive threatened species, but biological and mechanical controls have not been effective against leafy spurge in the sandy soils where the orchid is found.

“We applied the herbicide once in the fall, when the orchid was at the end of its annual blooming cycle and less likely to be injured,” Lym said. “That gave us a way to knock back the weed while the flea beetle population was getting established.”

Researchers found that their integrated program controlled 99 percent of the leafy spurge across the acres treated, without damaging the reproduction or development of the orchid itself. Their approach has tipped the balance back towards the natural ecosystem in the Sheyenne National Grassland, where native vegetation is now being reintroduced and the prairie orchid is better able to grow.

The same experience has begun to play out across North Dakota, says Lym, who is a 30-year veteran of the leafy spurge wars. He reports that prior to 1995, the number of infested acres in the state doubled every 10 years. Thanks to the combination of herbicides and biocontrols, the trend has now reversed. Half of the 1.6 million acres overrun by leafy spurge have been reclaimed.

“The right mix of weed control tools is helping us win the battle,” Lym says. “We’re able to manage leafy spurge over the long-term and reclaim our natural ecosystems so that the prairie orchid and other native plants can thrive.” 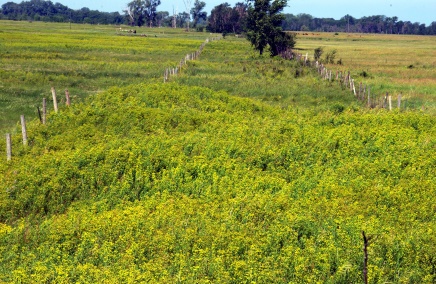