Coastal Communities in the Carolinas Turn the Tide Against ‘Beach Kudzu’

Just a decade ago, sand dunes, native plants and wildlife along some of the most popular beaches in the Carolinas were under attack by beach vitex (Vitex rotundifolia) – a highly invasive plant nicknamed “beach kudzu”. Today, though, the tide has turned thanks to the Beach Vitex Task Force, a unique public-private partnership established to fight the weed.

“The task force has been a true grassroots initiative,” says Lee Van Wychen, Ph.D., science policy director of the Weed Science Society of America. “There hasn’t been a government mandate. Instead, university scientists, extension personnel, volunteers and officials from local, state and federal organizations have come together on their own – drawn by a shared commitment to healthy beaches and dune systems.”

The task force battles a very real threat. An attractive, vine-like groundcover native to Hawaii and the Pacific Rim, beach vitex was brought to the U.S. mainland in the late 1990s to stabilize beach dunes eroded by Hurricane Hugo. But once the plant took hold, it did nothing to inhibit erosion. Its woody roots simply weren’t fibrous enough to hold sand.

Native wildlife species were also at risk. “One of the earliest warning alarms was sounded by volunteers monitoring threatened loggerhead sea turtles,” Doyle said. “They found dense mats of beach vitex vegetation overrunning turtle and seabird nesting habitats and virtually anything else in its path. The plant’s network of runners made it especially difficult for turtle hatchlings to leave their nests and get to the ocean.”

Though it can be tough to totally eradicate beach vitex, the task force has made significant inroads. In areas where the group has been active, the plant is no longer in danger of taking over.

Members began with education. They launched a website, attended town council meetings, spoke to civic clubs and developed a video distributed to public access channels in beach communities. They handed out thousands of beach vitex identification cards and created brochures now found in town halls up and down the coastline.

“Beach town personnel have been fantastic,” Doyle says. “In many cities, meter readers and others who are regularly outdoors are trained to spot and report beach vitex.”

When an infestation is found, it is mapped, eradicated and added to the task force database so it can be monitored for new seedlings and regrowth. Native species can then be replanted to protect dunes and inhibit erosion.

Treating beach vitex is labor-intensive, so the task force relies on a network of volunteers, contract laborers and city workers along the coastline, says Betsy Brabson, South Carolina coordinator for the organization.

“We go out in the fall when the plant goes dormant and its leaves change color,” she says. “We scrape it with a machete to expose the green bark and then brush on an herbicide registered for use on the plant. In some communities we’ve widened the treatment to include spray treatments in the late spring and early summer on days when it isn’t too windy. ”

Beach vitex doesn’t die easily, regardless of the method used. Brabson says about half the time, multiple treatments are required. “It isn’t unusual for a plant that appears to be dead after an initial treatment to regrow the following year,” she says.

There are confirmed beach vitex infestations in virtually every coastal state along the Mid-Atlantic, South and Gulf Coast. And many of the tactics used successfully in the Carolinas are now being adopted elsewhere to fight the weed. Virginia has even joined the Beach Vitex Task Force.

“We’ve used a model that can work well anywhere,” Brabson says. “The key is to focus on education, early detection and rapid response before an infestation gets out of control. ”

For more information on beach vitex and the work of the task force, visit http://www.northinlet.sc.edu/beachvitex/

PHOTOS AVAILABLE: High resolution images of beach vitex shown below are available for download from this link. 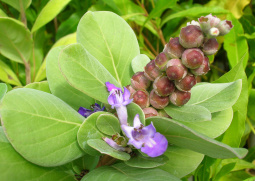 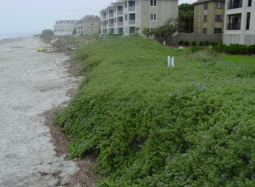 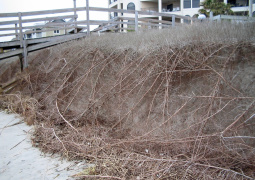