Seed Destructor Technology Next Step in War on Weeds

For decades, the fight against weeds in Arkansas agriculture – barnyardgrass and Palmer amaranth, in particular – has been an ongoing war of attrition as weed populations gradually acquire resistance to one herbicidal chemistry after another.

During this time, weed scientists and other experts with the University of Arkansas System Division of Agriculture have encouraged growers to adopt cultural practices and other alternatives to relying solely on chemistries for weed control, ranging from the use of crop rotation and cover crops to reduced row spacing.

As the 2018 harvest approaches, Division of Agriculture researchers are embarking on a multi-year trial that will test the efficacy of a new iteration of machinery known as the Integrated Harrington Seed Destructor and its ability to aid the practice known as harvest weed seed control. The practice is intended to prevent weed seeds from making their way back to the seed bank during harvest, thus denying them the opportunity to germinate and grow in the following season. 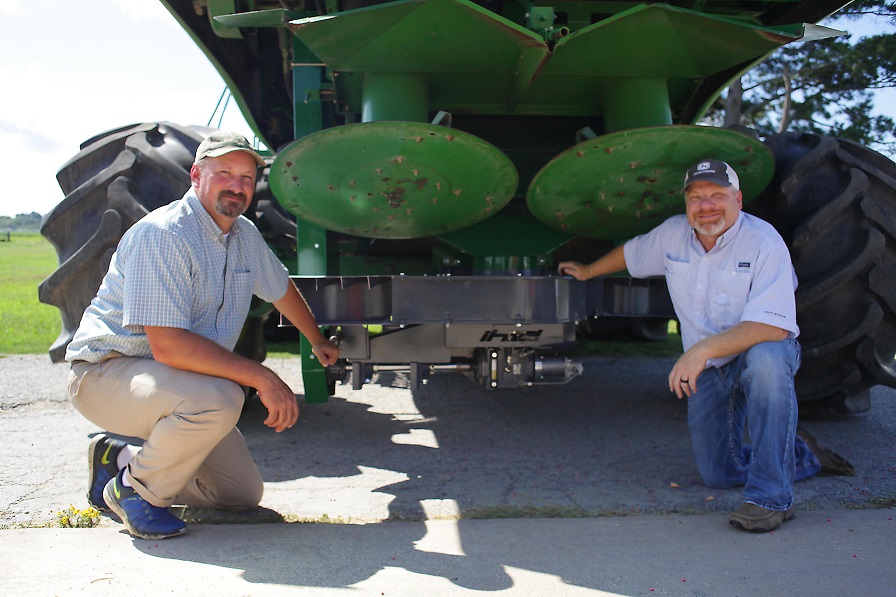 Jason Norsworthy (left) and Tom Barber with the new Integrated Harrington Seed Destructor being evaluated in Arkansas. (Photo from University of Arkansas).

Originally designed as a trailer-mounted unit that was pulled behind a harvest combine on its own trailer, the new Integrated Harrington Seed Destructor (HSD) being tested on large research plots at the Newport Extension Center is retrofitted into a John Deere 9760 STS. The HSD is powered by mechanical energy generated through a belt system attached to the combine’s straw chopper. The destructor’s grinder mill, which turns at about 3,100 revolutions per minute, effectively pulverizes anything put through it, ejecting a fine powder in its final stage.

Jason Norsworthy, weed scientist and professor of Crop, Soil and Environmental Science for the Division of Agriculture, said the integrated version of the equipment – originally designed and implemented in Australia, where farming conditions tend to be more arid – was a more practical choice for Arkansas farmers over the original design.

Tom Barber, extension weed scientist for the Division of Agriculture, pointed out that at the time of the HSD’s widespread adoption in Australia, the nation had run out of control options for rigid ryegrass in wheat and other cereals.

“We’re not completely out of options yet in the Mid-South, but we’re running short on options,” Barber said. “We have pigweed populations in our state that are resistant to four different modes of action, especially in northeast Arkansas. So we’re looking for that next thing that’s not chemical – a new cultural practice that can reduce weed seed going back into the seed bank, which will, in turn, reduce the numbers we have to deal with the following year.

“This time of year, you’ll see a lot of Palmer amaranth in soybean and cotton fields – even some in rice fields,” he said. “With this piece of equipment, the idea is that the majority of those seeds will go into the mill and be destroyed, and that’s less that we have to deal with in the subsequent crop.”

Palmer amaranth – commonly known as pigweed – has long been the bane of Arkansas growers’ existence. The Integrated HSD may prove especially effective in cutting into the weed’s survival, because approximately 99% of its seed is retained on the plant itself – a helpful fact when the plant is utterly pulverized during the destruction process.

Barnyardgrass, on the other hand, only retains about a third of its seeds, making it more difficult to impact the weed’s soil bank numbers. Nevertheless, Norsworthy and Barber believe the HSD has the potential to significantly reduce the weed seed bank.

The researchers warned, however, that no single practice should be treated as a cure-all.

“There’s some research in Australia that shows that if you only focus on weed seed control, or the HSD, after repeating that tactic year after year, you can select for resistance to the HSD, if it’s the only tactic you use in the field,” Norsworthy said. “This is just a tool, not a stand-alone system. It’s a tool we can integrate into our current system that’s going to help us sustain the utility of the herbicides we have today.”

“We don’t have any new herbicide modes of action being developed,” Barber said. “It’s been 30 years since a new mode of action was developed. We don’t think our solutions in the future are going to come out of a jug, at least long term, because we’ve been on this resistance trend for at least 10 years now.”

Norsworthy and Barber said they’d like to have at least three years of data on the HSD’s efficacy in the state, and that the first year will likely present a steep learning curve.

“We know that this technology works well in Australia,” Barber said. “But this is Arkansas. Our combines have to have four-wheel drive, and massive tires. Sometimes, we just have to ‘cut in the mud.’”

“There’s always going to be bugs in a system and learning what its limitations are,” Norsworthy said. “Beyond that, we’re looking forward to understanding what effect it’s having on the soil seed bank, and how we’re utilizing that in a cropping system.”

The original news article can be accessed here.

This entry was posted in Weeds in the News.