When a hurricane roars inland, most low-lying coastal states rely on a network of pumps and canals to dissipate the storm surge and protect both lives and property. But add invasive plants and weeds to the mix, and you have a recipe for a disaster. Overgrown vegetation can wreak havoc and promote flooding by jamming pumps and blocking water flow.

The problem is especially pervasive in Florida, where public lakes are connected by creeks, rivers or constructed canals that ultimately lead to the Gulf of Mexico or the Atlantic Ocean. Some of the largest pumps in the world are used to manage storm runoff and keep the surrounding areas from flooding.

“Invasive plants tend to coalesce at flood control structures in lakes and canals and at bends in river channels,” says Jeffrey Schardt, environmental administrator for invasive plant management with the Florida Fish and Wildlife Conservation Commission. “If left unmanaged, they can clog pumps, impede water flow and make flooding much, much worse. It’s imperative to have the overgrowth under control before a hurricane barrels inland.”

Schardt says problems associated with invasive plants like water hyacinth and water lettuce reached crisis proportions along Florida’s waterways during the 1960s. But officials learned from that experience and have adopted routine maintenance controls to help prevent a recurrence.

“We’ve found a single patch of water hyacinth can double in size in as little as two weeks during the growing season – forming large rafts that can be carried by wind and water currents, clog pumps and cause flooding,” Schardt says. “Time is not our friend, so we concentrate on frequent, small-scale control operations to prevent large-scale problems from developing.”

In addition to water hyacinth and water lettuce, invasive plants and even some native, emergent plants can form dense floating mats – called “tussocks” by aquatic plant managers. These floating weed rafts are a worldwide phenomenon found in places such as Argentina, Australia, Finland, India, Japan and Kenya. Emergent plants like primrose willow (ludwigia) “tie” the rafts together with their roots, stems and branches to form larger masses.

Florida environmental teams use boats to patrol shorelines and conduct regular monthly or bimonthly inspections for invasive species that can form tussocks, and herbicides are applied to control small patches as they emerge. The herbicides selected take into account how the body of water is used and any native plants that may be comingled with the invasive species.

As the weeds decompose after treatment, the wave action, oxygen and light that were blocked by the mass of vegetation are restored to normal levels – breaking down sediments and restoring the natural ecosystem.

Schardt says that regardless of how well prepared the state is, though, there will be invasive plant issues to be managed in the aftermath of a hurricane.

“We can’t control all the plants that end up in lakes, rivers, flood control structures and navigation channels,” he said. “So we have a network of contractors ready to remove displaced plants with harvesters, shredders and other mechanical devices. The sooner we can get the vegetation out of the way, the more quickly we can alleviate upstream flooding.”

“Invasive plant control issues faced by Florida are common in most any state with frequent storm flooding, including Texas, Louisiana, Mississippi and Alabama,” says Lee Van Wychen, science policy director for the Weed Science Society of America. “Officials have discovered the vital importance of a proactive, integrated pest management plan that uses the most effective combination of tools available.” 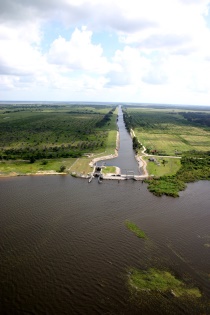 The outfall canal and navigation lock on 20,000- acre Lake Toho are among the many bodies of water in Florida that need to be kept clear of aquatic plants. Photo courtesy of Jeffrey Schardt the Florida Fish and Wildlife Conservation Commission. 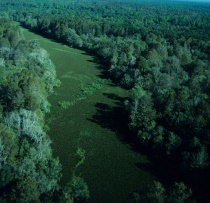