Harvest is now underway for the colorful cranberries that herald the holiday season and grace dinner tables around the country. The USDA predicts the 2010 crop will be the second highest on record – led by Wisconsin and Massachusetts, respectively, the top two cranberry-producing states in the country.

But before they make their way to your table, cranberries (Vaccinium macrocarpon) must be defended from a variety of pesky and persistent weeds.

“Cranberries are a perennial crop, and that makes weed control challenging,” says Hilary Sandler, integrated pest management and weed specialist for the University of Massachusetts Cranberry Station. “Most problem weeds that impact cranberries are also perennial and come back year after year, thriving under the same growing conditions as the crop.”

Managing weeds in cranberry crops can be a tough challenge because of how cranberries grow. They are low, woody vines typically two to eight inches in height that form a continuous, lawn-like swath across a bed or bog. That makes it impossible to till weeds without damaging the crop itself.

Jed Colquhoun, associate professor in the Department of Horticulture at the University of Wisconsin, says nearly 80 percent of Wisconsin cranberry growers focus on early intervention and hire experts to scout their crops for weeds and other pests throughout the growing season.

“Part of dealing with the enemy is to know where the enemy is,” he says. “Surveys show that most cranberry beds in our state are scouted at least 14 times throughout the growing season.”

Those same surveys indicate that nearly nine out of 10 cranberry growers in Wisconsin rely on an integrated approach to weed control. They hand-pull weeds as soon as spotters identify them, suppress weeds with sand, replant bare spots to shade out weed seedlings and mow the areas surrounding the crop bed to keep weeds and seeds away.

When herbicides are required, Colquhoun says many growers use a “wick wiper” as an alternative to a broadcast application. A boom is pulled across the bed to wipe the herbicide across any weeds that are growing taller than the cranberry vine. Wick wiping minimizes the amount of chemical applied and protects both the cranberry vine and fruit. Very few herbicides are labeled for such a unique use, but they are critical to an integrated weed management program in cranberries.

Sandler says some Massachusetts growers are experimenting with handheld flame cultivators that burn down weeds. And many are also using carefully timed flooding.

“Flooding is used throughout the season for weed, insect and disease control,” she says. “Often growers will flood the beds briefly in the spring and fall for weed control. But if the situation becomes desperate with a particularly invasive weed, they may sacrifice the crop for the year and flood a bed for as much as two months during the summer.”

The weeds that plague cranberries can vary by region.

Colquhoun says those most common in Wisconsin are plants that wouldn’t be called weeds in a different setting. Many are native wetland species of wildflowers and trees that unfortunately have become well-established in decades-old berry beds.

“Trees in particular can be very difficult to remove,” Colquhoun says. “Hand weeding is often the only option, and it takes a long-term commitment to outlast them.”

In Massachusetts, many of the same weeds can be a problem. But they pale in comparison to Dodder (Cuscuta gronovii) – a parasitic weed that can quickly overrun a cranberry bed. It wraps a spaghetti-like tangle of shoots around the plants to form a tightly woven mat and rob them of vital water and nutrients. As a result, dodder is considered as a “zero tolerance” weed managed at the highest priority.

Another particularly bothersome weed plaguing Massachusetts cranberry crops is poison ivy (Toxicodendron radicans). When it invades a bog, the low pH level stunts the weed’s growth so it reaches only a few inches in height. That means poison ivy can hide in the crop canopy where it is difficult to spot and to control.

Sandler says a successful cranberry harvest depends on growers knowing how to prioritize weeds based on their biological characteristics and impact.

“Some weeds don’t do much damage and we can just live with them,” she says. “But there are others that cause great concern and must be controlled before they cause serious economic loss.” 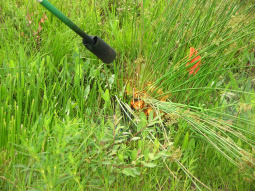 Handheld flame cultivators can be used to burn down some weeds in cranberry crops. Photo courtesy of Katherine Ghantous, University of Massachusetts Cranberry Station 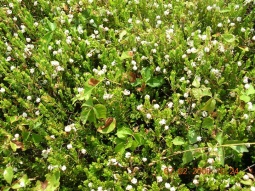 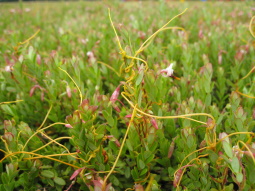 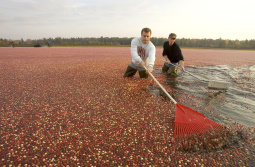 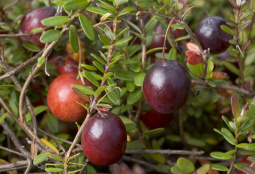 A close-up of cranberries on the woody vine of this perennial crop. Photo courtesy of the Wisconsin State Cranberry Growers Association 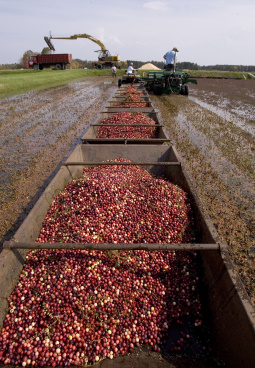