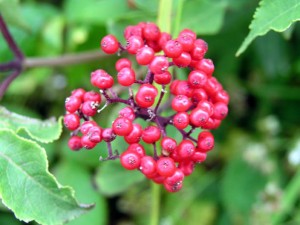 Plants that are allergenic or that cause dermatitis or mechanical injury are annoying, but the victim usually recovers. Plants that are poisonous when eaten, however, may cause serious illness or even death.

Since these plants are harmful only if chewed, sucked, or swallowed, poisoning can nearly always be avoided by keeping all plant parts out of the mouth. Some plants, such as white snakeroot and brackenfern, however, contain poisons that can be transferred into milk if cows eat the plant. People who drink such contaminated milk also may become poisoned. Entire plants may be poisonous, or the toxicity may be confined only to roots, vegetative parts, berries, or seeds. Plants may be highly toxic at certain stages of growth and relatively harmless at others. Poison hemlock, oleander, and the seed of rosary pea and castorbean are so poisonous that small amounts may be fatal if eaten. Marijuana and the seed of jimsonweed and other species of “Datura” produce a narcotic effect. The seeds of jimsonweed have caused such severe hallucinations and disorientation in humans that deaths have resulted from secondary causes such as drowning and exposure.

Most cases of internal poisoning are accidental and occur primarily among children who are attracted to brightly colored berries and seeds, or who suck and chew other plant parts. Children and adults alike should be taught never to put any part of a plant in the mouth, much less swallow it, unless they can positively identify the plant and know it to be safe.